Armenia is Elected to the United Nations Human Rights Council 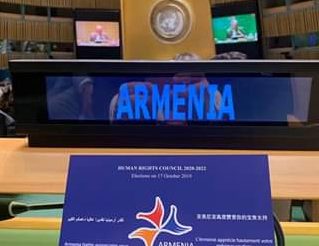 October 17, 2019, Geneva: We are pleased to inform you that the United Nations just announced Armenia as one of the 14 new Human Rights Council members.

According to the United Nations, “The newly elected countries will serve for three years and take up their seats after 31 December. As only 47 of the UN’s 193 Member States can sit on the Council at any one time, an equal number will be giving up their places.”

The Human Rights Council is an international body that is responsible for promoting and protecting human rights around the world. It has the power to launch fact-finding missions and establish commissions of inquiry into specific situations.