Zoryan Institute Explores the Saga of Christians in the Middle East

In the Spring 2011 edition of the Middle East Quarterly, John Elbner writes the following in his article, “Christians Under Siege” –

“Like their counterparts in most of the Islamic Middle East, Turkey’s Christians are effective hostages to the arbitrary actions of powerful elites, made up of Islamic state and non-state actors who collectively monopolize violence. The oldest Christians retain [a] living memory of the state-sponsored mass deportations and massacres that culminated in the World War I Armenian genocide. During the twentieth century, Turkey’s Christian population dropped to the verge of extinction. The last anti-Christian mass violence was the 1955 deep state-sparked, anti-Greek pogrom in Istanbul, which also took a heavy toll on the city’s Jewish and Armenian populations.”

“The extent to which this cultural phenomenon still influences Turkish society at the grassroots level is evident from the findings of an EU-financed public opinion:

· One third of Turkish Muslims would object to having a Christian as a neighbor.
· More than half believe that Christians should not be allowed to openly express their religious views in printed publication or in public meetings.
· More than half are opposed to Christians serving in the army, security services, police force, and political parties.
· Just under half believe Christians should not be active in the provision of health services.

The road from such views to outright discrimination and a heightened threat of violence is very short indeed.”

Nearly every day the international media report on atrocities committed in the Middle East, including rape, slavery of women refugees, persecution of Christians and Yezidies minorities, and even Muslims who do not adhere to radical Islam’s objectives. We are continuously barraged by images on our television screens showing the killings, uprootings and deportations of millions of people from their ancestral towns and villages destroyed by suicide bombers or artillery by ISIS (ISIL). We see the remnants of destroyed Christian churches of Syriacs, Chaldeans, and Armenians – including the Genocide monument church in Der el Zor (the Armenian Auschwitz) – the historical monuments and cultural legacy of the Assyrians in Northern Iraq, and so on.

Some 1.2 million Assyrian and Syriac Christians have been uprooted and dispersed from Northern Iraq along with hundreds of thousands from Syria simply because of their beliefs. These inhumane acts have been committed in the name of Allah, the Caliphate and by groups mobilized by religious slogans that kill and destroy “the other”.

These events are reminiscent of what happened in Ottoman Turkey and mainly in the same region where ISIS operates today. Beginning in the period February 1915-1922, and under the cover of World War I and its aftermath, the Christian population, then about four million strong or approximately 30% of the total population of modern day Turkey, simply vanished to the verge of extinction. The Christian minorities in Turkey (Armenians, Assyrians, and Greeks), were uprooted, deported from their ancestral lands, killed, and faced the same fate which Christians are facing today in the Middle East.

Last week on May 21st and 22nd scholars from Armenia, Australia, Canada, Greece, Norway, Sweden, Turkey and the U.S. came together to explore various aspects of the shared experiences of the non-Muslim minorities in Ottoman Turkey and the region during the years 1915-1922 and thereafter, which has typically been treated as three separate cases of crimes against humanity, ethnic cleansing and genocide. The experiences of the Armenian, Assyrian and Greek minorities of the Ottoman Empire were discussed at the conference entitled, World War I and Beyond, at The Graduate Center, City University of New York, jointly organized by the Middle East and Middle Eastern American Center, The Asia Minor and Pontos Hellenic Research Center, and the Zoryan Institute. 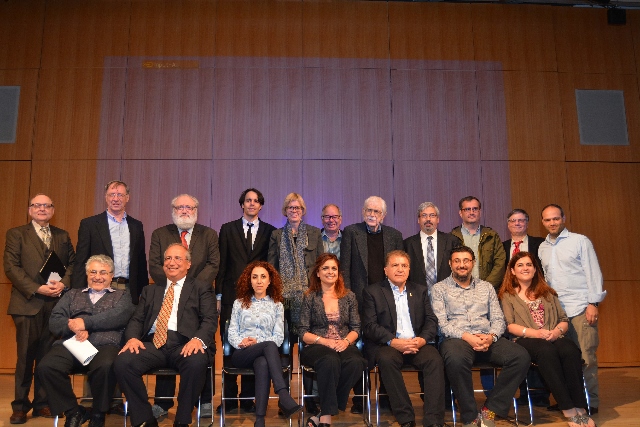 Papers presented, such as A Zone of Extreme Violence – the Intertwining of the Armenian and Assyrian Genocides, The Kemalist Movement and the Christians of Pontos, in 1919-1923, from an International Politics’ Perspective, and The State and Fate of Jews in the Ottoman Empire during World War I, solidified that the unjust treatment inflicted by the Ottoman Empire to one ethnic group was also being inflicted on the others for the same political objective: Turkification of the empire even through the elimination of the non-Turkic Muslim nationalities to establish pan-Turkism (the political union of all Turkic peoples from the Balkans to the Great Wall of China; a territory called Turan).

Why does the Zoryan Institute organize these types of conferences?

The Zoryan Institute is a place to think critically about the Armenian reality. It is a place for those with questions about their history, their identity and their future as a people. It is for those propelled by deeply felt intellectual concerns and compelled by the strong desire for change. The Zoryan Institute provides a forum for free and critical thinking about contemporary issues affecting the Armenian people through a process that is analytical, scholarly, interdisciplinary and detached; this process would include the continual and systematic re-examination and International Scholars at Zoryan Institute Conference, “World War I and Beyond”  revaluation of our reality taking into account the impact of rapid changes in modern society including advances in technology.

Dr. Rouben Adalian in his book titled Historical Dictionary of Armenia had this to say about the Institute:

“The Zoryan Insitute marked a new threshold in the intellectual development of the Diaspora. It became a meeting ground for the examination of the topics by method of inquiry from multi cross disciplinary fields. It opened venues for engaging the broader scholarly community (Armenian and non Armenian) in comparative studies of crucial issues.”

With a growing list of publications of some 40 books reflecting the research of renowned experts and scholars based on primary sources, two periodicals on Genocide Prevention and Diaspora Studies, and various education programs such as the Genocide and Human Rights University Program which has been attended by more than 400 students from 25 countries since 2001, the Insitute has come to stand for a new model of research and study, and as an independent forum for intellectual inquiry in the Armenian Diaspora.

The Zoryan Institute is the pride of Armenians worldwide and must be supported by individuals and organizations for its ongoing work in homeland, diaspora, human rights and genocide studies. If we are to understand our future, we must first understand our past.