Vote! Diaspora Artists call for a just and constructive path towards democracy ahead of Sunday’s parliamentary election in Armenia

American rock musician and lead singer of System of a Down Serj Tankian, Canadian actress and producer Arsinée Khanjian, Canadian filmmaker Atom Egoyan, American film director and screenwriter Eric Nazarian arrived in Yerevan this week to be official observers of the upcoming parliamentary elections on April 2. 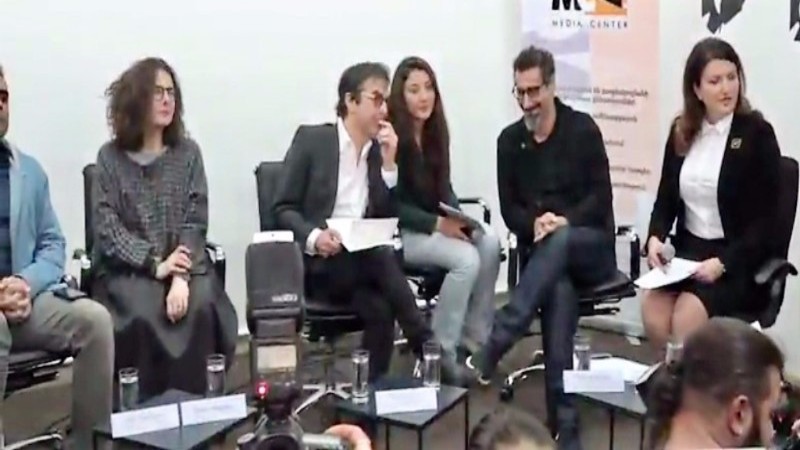 Arsinée Khanjian said there is a need to “change Diaspora involvement from traditional to direct involvement with the people… Our approach was critical in the following perspective: Armenians in Armenia and Diaspora should have the ability to make their individual decision…” This is the first time that the Diaspora has been engaged in the election process in Armenia in this manner.

In September 2016, this same group and other diaspora Armenian artists spearheaded a global petition that led to “Justice Within Armenia”, a coalition of concerned Armenians around the world who advocated for free and fair elections and greater civil society representation. Since then, over 5000 people from Armenia and the diaspora have signed the petition, expressing the “need to visualize an egalitarian state worthy of the resilience of our people.”

Serj Tankian emphasized that they took part in starting the current initiative because they “were afraid of what might happen in Armenia given the Sasna Tsrer situation and given the escalation of tension within the country after years of injustice, after years of apathy.” This was in line with Arsinee’s interview with the Zoryan Institute in July 2016, when she stated, “The Diaspora is terrified of the possibility of any civil war or any blood spilled within the country…The Diaspora is…terrified of losing the statehood [of Armenia].”

This sense of solidarity is demonstrated in the participation of 300 diaspora members as observers who will travel across Armenia, to different polling stations in various cities and villages.

Atom Egoyan spoke on Armenia’s unique political history, after two vulnerable years of independence, we have 70 years of Soviet rule…it fostered the creation of educational facilities, cultural tools and civic infrastructure in Armenia today. But, he believes that it is still not a democratic society. He added that “a decision not to vote on Sunday would be a form of self-tyranny, it is telling yourself that you have no voice.”

Egoyan continued, “the bones of this proud nation are deep and powerful, but the muscles on the bones need to be exercised. Democracy is the muscle,” he said. “It allows us to express ourselves in the most coherent way possible.”
After already seeing examples of vote rigging and electoral corruption, Egoyan said “we can assume that electoral tampering will also occur this weekend.”

Nazarian spoke on the process of addressing issues within Armenia—whether political or social—and how the dialogue needs to be continued, and not discussed briefly for one day. He added that the exclusivist attitude that diaspora Armenians are not official Armenians, needs to change. He said that one does not need to live in Armenia in order to be Armenian, adding that Ayvazovsky had never seen Ararat when he painted it and Kirk Kirkoryan never lived in Armenia but did a lot for the country.

This unity between diaspora groups and those living in Armenia was also something that Khanjian had emphasized “Exercise your vote, exercise your democratic muscle,” said Egoyan. “Destroy the tyranny within yourself. The tyranny that you cannot affect change. Liberate yourself and you can have change, and that spirit will completely revolutionize this country. It’s unstoppable once its actually there”