International Women’s Day: Celebrating the Role of Armenian Women, Then and Now

In the context of modern Armenian history, Armenian women played a vital role, specifically after the genocide, in the survival of the Armenian communities worldwide and rebuilding the nation.

During the genocide, men were conscripted and were used as forced labour and killed. Meanwhile, the young children were torn away from their families to be Turkified. The remaining were subject to mass deportations by government authorities. This was devastating for the women, as they were fraught with starvation, torture, kidnapping, forced marriage, forced conversion to Islam, and sexual assault. The entire process was intended to make the Armenian nation within the Ottoman Empire disappear.

But the Armenian nation did not disappear. Despite their trauma, Armenian women ran schools and worked as teachers; they were trained and served as nurses; they wrote and published books and journals; and they married and raised children, to whom they passed on the Armenian language, Armenian culture, and Armenian identity.

The Armenian women of Constantinople were particularly engaged. They published activist journals, such as Artemis and Hay Gin from 1919 to 1933. It was a primary platform for feminists who offer an alternative to the mainstream discussions of how to be Armenian in the Republic of Turkey. Its first editorial asserted with boldness an awareness of its critical role.

“During these four hellish years, we, especially Armenian women, have demonstrated that beyond housework and child care we can bear with all sorts of hardships. We can also be trusted with jobs and markets; and we have proven to those who have spoken against our cause that it is best that they keep their mouths shut.
. . . .
We will assume our duties, create our rights, and shape our roles. Our feminist instincts will not hinder our homemaking chores. Rather, the rebirth of our sex will take us to the summit of our nation and to the summit of our fatherland.” 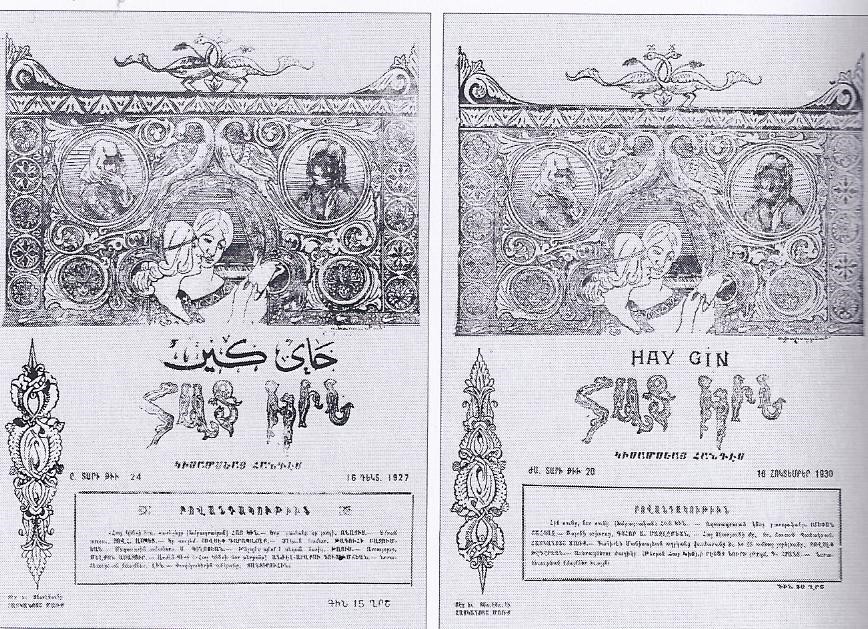 Perhaps most importantly, Armenian women considered the survival of their children to be an act of resistance to and revenge for the Genocide. This was articulated explicitly by Payladzu Captanian, a teacher in Samsun, in her 1922 memoir, Tsavag:

“We were driven by immeasurable motherly love and the cause of national existence. We were sure that even if we managed to keep three children alive, we would have already taken our revenge on the enemy. There would be established three families on the ruins of one ruined family, and that’s how the Armenian Nation would come back to life and reconstitute itself.”

Today, Armenian women continue to support their nation. Throughout the Velvet Revolution that brought in a new government, women were both behind the scenes coordinating blockades and on the front lines of protests. Women were ready and willing to fight for their nation, just as they had during and after the Genocide.

The shift in government signaled a potentially crucial moment: a moment in which the historically patriarchal societal structures could be challenged. The thousands of women who took to Armenia’s streets during the Revolution protested not only for change in government, but for their rights in a traditionally patriarchal society. Maria Karapetyan, development director of the Imagine Centre of Conflict Transformation, articulated this while addressing the crowds at one protest:

“I want to address my sisters who stand together, hand in hand and fought a double fight for the change of power in Armenia and for their equal rights in public. Long live sisters!” 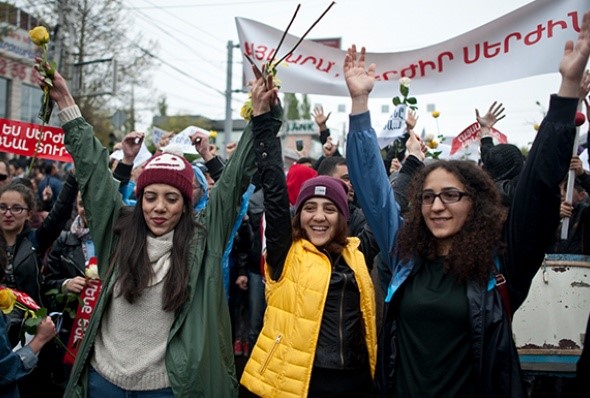 Today, Armenian women face gender-based violence and sexual harassment, along with high rates of sex-selective abortion (favouring boys) and domestic violence. The gendered pay gap results in disproportionate wealth, which impacts women’s access to upward mobility. Women’s average monthly wages represent only 64.4 percent of men’s, which gives Armenia one of the largest gender pay gaps in all of Eastern Europe. Beyond this, societal values and views continue to harm women’s ability to progress into roles of authority, including political empowerment.

On this International Women’s Day, let’s celebrate the strength, dedication, and achievements of Armenian women, and recognize their immeasurable ongoing contributions to the development of their nation. At the same time, let’s recognize the challenges that Armenian women face economically and socially. As Armenia develops post-Revolution, the voices of women should be emphasized and respected, and their concerns should be addressed.

Much of the material for this brief editorial was taken from Lerna Ekmekçioğlu, Recovering Armenia: The Limits of Belonging in Post-Genocide Turkey (Stanford, CA: Stanford University Press, 2016).