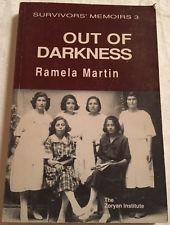 Out of Darkness is the story of Ramela Der Pilibosian Martin who was born in Malatia, Western or Ottoman Armenia, just before the Genocide of 1915-1917.  Her father had died before she was born.  After the disappearance of her brother and the deportation of her grandfather by the Turks, Ramela Martin and her mother were forced to join the death marches, but not before her mother arranged to leave Ramela's older sister with a Turkish family.  Escaping from the death marches, the women tried to return to their home but her mother died on the way, leaving Ramela alone.  She was eventually rescued by the Near East Relief and placed in an orphanage.  From the interior of Anatolia, Ramela Martin, together with other orphans, was moved to Aleppo, Beirut, Istanbul, and finally a refugee camp in Corinth, Greece. Ramela Martin's description of the camp is graphic and moving, as is her account of the development of her interest in the profession of nursing which she pursued at the American Women's Hospital's Training School in Kokinia, Greece.  Having established contact with relatives, Ramela Martin left Greece to Havana where she secured a visa to immigrate to the United States. Ramela Martin tells her story of dislocation, immigration, struggle, and survival with passion and courage.  In the end, there emerges the portrait of a woman wounded by history but capable of endurance and wholeness. Ramela Martin trained as a nurse at the American Women's Hospital in Kokinia, Greece.  After immigrating to the United States, she took the Connecticut State Board examination for nurses and received her R.N.  She continued practicing and teaching her profession for twenty-seven years.  In 1968, she traveled to Soviet Armenia where she was reunited with the sister whom she had lost during the Genocide.  She retired in 1975, and in 1979 she and her husband, Jim Martin, moved to Florida where she now resides.