Astrid Aghajanian was one of the few remaining survivors of the Armenian genocide and was believed to be the last living in Britain. 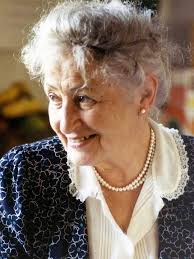 In 1915, when the Ottoman rulers began their systematic annihilation of the Armenians living in Anatolia, Astrid’s father was shot and Astrid, her mother, grandmother and baby brother were deported and force-marched into the Deir ez-Zor desert.

On one occasion the Turkish officers asked the Armenian mothers to hand over their children, claiming they would be taken to an orphanage. Some mothers parted with their offspring, in the desperate hope they would be given a chance to survive. Astrid’s mother, however, refused to let her daughter go.

Some time later she and the other deportees heard terrible screaming; the soldiers were burning the children alive. By this time, Astrid’s grandmother and brother had perished in the harsh desert conditions. Determined to keep her daughter and herself alive, Astrid’s mother decided to try to escape.

One night she hid Astrid and herself under a pile of corpses, staying there until daylight until she was certain the soldiers had moved on. Mother and daughter then began to wander the desert alone. Found by a Bedouin tribesman, who then sold them to another, Astrid and her mother were taken to a Bedouin camp, where they now had shelter but continued to live in fear.

Eventual salvation came in the form of a soldier on horseback. A Turkish officer, he had come looking for survivors of the death convoys, intending to take them to safety. Fortunately for Astrid and her mother, he was true to his word and Astrid would always remember that, although the Turks had destroyed her family, it was thanks to a Turk that she and her mother were saved.

The officer took Astrid and her mother to the city of Deir ez-Zor, from where they managed to make their way to Aleppo. Here they had relatives and could finally begin picking up the pieces of their shattered lives.

Astrid Aghajanian had been born Helen Gaidzakian in 1913, in Albistan, Turkey. When her mother eventually remarried, Astrid’s new stepfather changed her name from Helen to Astghig (the Armenian form of Astrid). The family moved from Aleppo to British Mandate Palastine in the early 1920s, living first in Haifa, then in Jerusalem, where Astrid’s stepfather ran a printing press in the Armenian quarter.

Astrid attended Schmidt’s convent school for girls in the city, before the family returned to Haifa, where she became a teacher. In 1942 Astrid married Gaspar Aghajanian and the couple had two daughters. The family moved from Haifa to Tiberias when Gaspar was appointed a judge and put in charge of the courts of Tiberias and Safad.

In 1948, as fighting broke out between Arabs and Jews, the Aghajanians found themselves caught in the crossfire and had to abandon their home. Astrid and her daughters were sent in an armed convoy to Amman, where they were eventually joined by Gaspar.

Stateless for a year, the family applied for and were granted British citizenship and in 1949 they moved to Kyrenia, Cyprus. Gaspar found work at the nearby American monitoring station, while Astrid took care of the household and carried out volunteer work for the Red Cross. She also ran a successful kindergarten, nurturing the most timid children to become happy and confident.

Fully intending to spend the rest of their lives on the island, Astrid and Gaspar had a house built to their own specifications, around which they created a wonderful garden. The Turkish invasion of Northern Cyprus in 1974, however, put paid to their plans for a peaceful retirement. Astrid and Gaspar sought refuge at the British base in Dhekelia and were eventually taken to England as refugees by the RAF.

They had lost everything. Now in their sixties, they were forced to start their lives from scratch once again. Gaspar returned to work and the couple eventually settled in Shoreham-by-Sea, West Sussex, where they lived until Gaspar’s death in 2007.

The British High Comissioner for Cyprus had asked the Aghajanians to submit a claim for compensation for the loss of their house and possessions, which included items saved from the genocide six decades before. The claim was rejected by the Turkish authorities on the grounds that the couple were “of Armenian descent”. The Aghajanians began a lengthy correspondence with Turkish, British and American authorities in the hope of some justice, but this came to nothing.

In 1997 Astrid was interviewed by Robert Fisk and her story appeared in an article in The Independent entitled “Shameful echo of a forgotten holocaust”. This prompted the Imperial War Museum to contact Astrid, and both she and Gaspar were interviewed and recorded for the Museum’s archives. Astrid’s story is also mentioned in Fisk’s book The Great War for Civilisation, and more recently, in 2010, Astrid was interviewed for the Holocaust Memorial Day Trust website. She was immensely proud to do this; she felt she was paying tribute to her mother, who had struggled so hard to save her.

Astrid was fond of comparing her turbulent life to that of spiders: “You may destroy the spider’s home, but he will always build it again.” Astrid will be remembered for her generous hospitality, her creativity, her indomitable spirit and above all for her incredible resilience in the face of adversity. Justine Rapaccioli Helen (Astghig/Astrid) Gaidzakian: born Albistan, Turkey 28 March 1913; married 1942 Gaspar Aghajanian (died 2007; two daughters); died Gloucester 11 May 2012.