A Symposium Initiated by the Zoryan Institute Emphasizes Innovation

Yerevan, Armenia: Manoogian Hall of the American University of Armenia (AUA) was packed this afternoon with members of the public who assembled to hear renowned panelists discuss the history, practice and implementation of transitional justice. The International Transitional Justice Symposium, co-organized by the Zoryan Institute and AUA, provided a space for the public to learn about this reparative concept, ask questions, and hypothesize how transitional justice might apply to Armenia.

Zoryan Institute Outreach Coordinator and Project Manager, Ms. Megan Reid, opened the symposium by inviting Dr. Randall Rhodes, AUA Provost, to make his welcoming remarks. He stated, “Today you will hear from speakers who, based on their scholarship, and research will provide theoretical framework and case studies for the contextualization and implementation of transitional justice.” He explained how this discourse is opportune for Armenia as it addresses its past and designs a roadmap for its future.

K.M. Greg Sarkissian, President of the Zoryan Institute, declared “We are here today to promote intellectual discourse around the concept of transitional justice through an academic perspective, devoid of any political motivations.” Mr. Sarkissian explained how this symposium, much like the Institute’s projects of the past, will demonstrate a core value of the Institute: that education can empower through facts, references, analysis and perspectives. He closed his statement by announcing the establishment of Zoryan Institute’s “Human Dignity Fund” with an initial contribution of 37 million AMD ($100,000 CDN) for the purpose of organizing academic symposiums such as this one in Armenia.

“It is my hope that with the help of symposiums like today’s, and Human Dignity Fund Armenia, can help build a country where people want to live, a country where they will be happy and have their dignity.”

Prof. William A. Schabas, renowned international human rights and criminal law expert and member of Zoryan Institute Board of Directors, opened his comments by emphasizing that 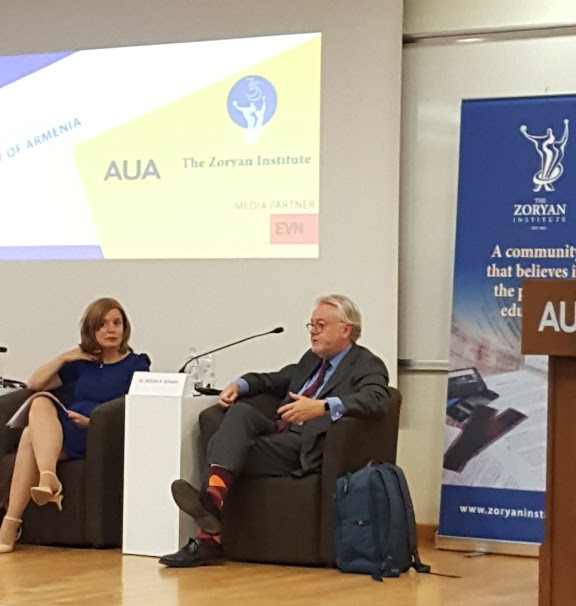 He continued by saying that transitional justice “is about discretionary choices – for the victims to see that justice is done, but it’s also about building something new.” As an example, he mentioned that in some cases of transitional justice “compromises were made in exchange for the former regime giving up power.” 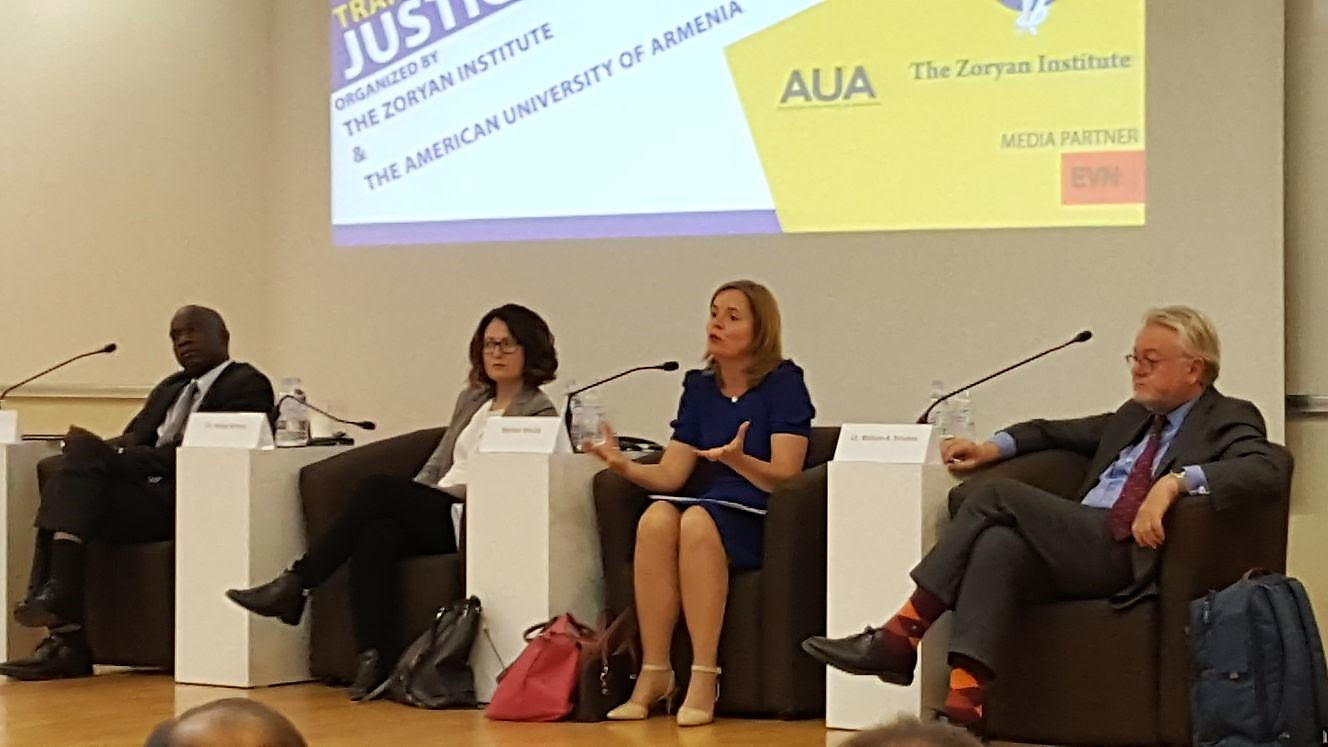 The panelists all agreed that Armenia is in a position to innovate an approach to transitional justice based on lessons of the past. Marieke Wierda, Esq. stated, “the question is not if transitional justice will work; it is how do you make it work for you – and what is necessary to build a process that works for [your nation].” Her presentation focused on the “social contract” being integral to the rebuilding of social trust, because it reaffirms the rule of law. At the heart of reparation, she argued, is public consultation and national dialogue. In this, the role of civil society and the media is integral. She further emphasized the importance of incentive-based systems versus investigative processes in uncovering truth, arguing that this yields stronger results in rebuilding the social contract.

Dr. Nadia Bernaz, discussed transitional justice through the framework of corporate accountability. She stated that in “many transitional justice situations, the public and private sectors overlap considerably.” Dr. Bernaz argued that institutional reform is a central issue, but perhaps the most delicate within the scope of transitional justice. The private sector is an economic force that is integral to the future success of a country, and so institutional reform must carefully strike a balance of encouraging corporate accountability without threatening the nation’s economic development. 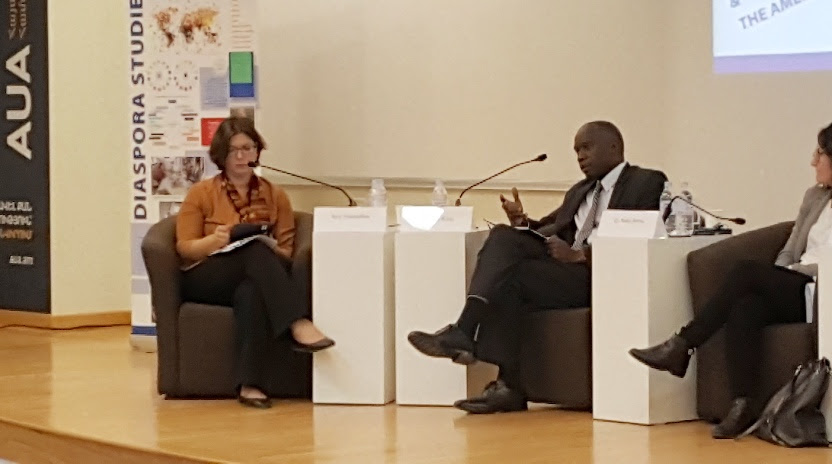 Barney Afako, Esq., shared his knowledge and experience in conflict mediation, drawing on mainly East African examples. Afako argued that young countries implementing transitional justice must incorporate a “strong element of vigilance and [clear priorities],” as this process is fundamental to state-building and nation-building. He emphasized that one method is to examine the past by way of inquiry. By acknowledging mistakes of the past, a country can avoid these same violations in the future. 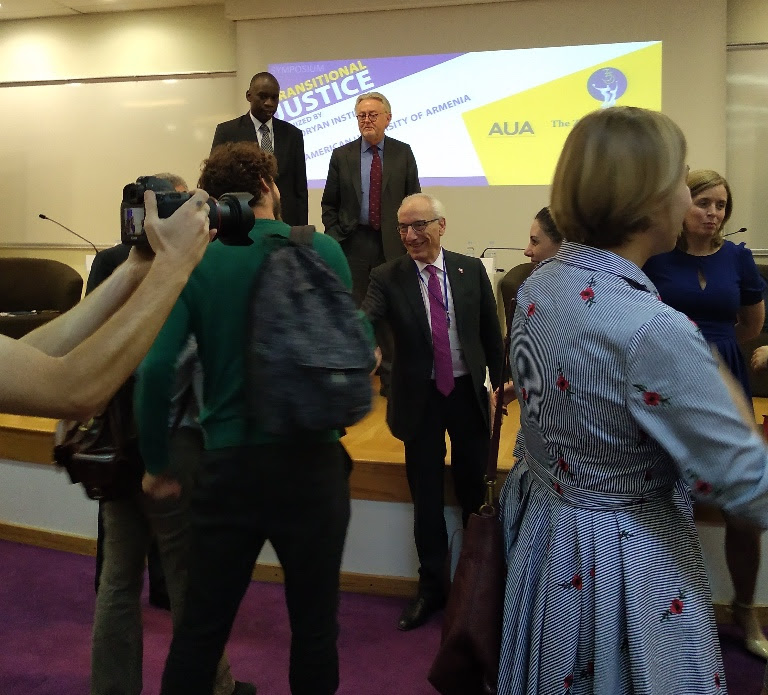 Following the question and answer series, Sara Anjargolian, Esq., moderator of the symposium, asked the panelists what they would advise for a country embarking on a journey towards transitional justice. “Trust your instincts, interrogate the experts, be skeptical of advice, and check in with each other” explained Mr. Afako. “Don’t forget corporations,” urged Dr. Bernaz, who further suggested that it is important to strike a balance between focusing on past crimes, while moving forwards. Ms. Wierda said that Armenians should remember to “reach across the political divides to strike balance between accountability and reconciliation, and to innovate, and make [their] own way.”

Prof. Schabas closed the symposium by reminding the audience that

“Corruption is pervasive and trickles down into everyday attitude and culture, and this needs to change. Transitional justice,” he stated, “is a process which can encourage this change.”

The Zoryan Institute was honored to undertake the coordination of the International Transitional Justice Symposium, drawing on its Board of Directors and network of scholars to promote intellectual discourse around this important concept. The symposium has provided a framework of knowledge through which Armenians can innovate their own, unique process of transitional justice that addresses their specific needs and goals. Through education, public discourse, rule of law, perhaps, as Dr. Schabas suggested, in “25 years, other nations will examine the Armenian approach to transitional justice.” 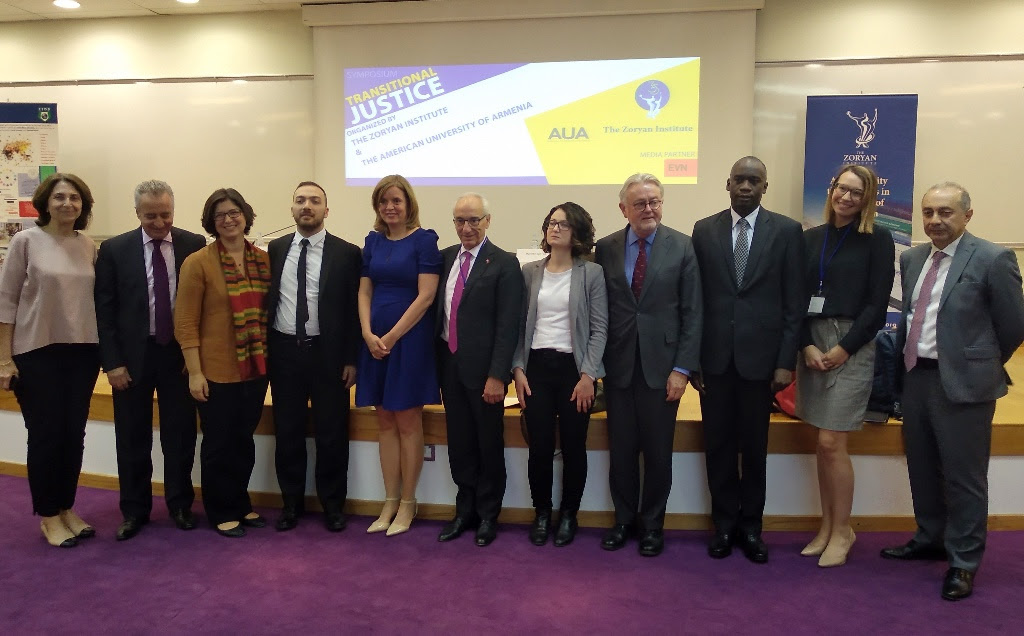 The panelists included:Dr. William A. Schabas is an international human rights and criminal law expert. He, a professor at Middlesex University and Leiden University, has served as the head of the UN Gaza Commission, and as Commissioner on the Sierra Leone Truth and Reconciliation Commission.

Marieke Wierda, Esq. is currently the Rule of Law Advisor for the Dutch Ministry of Foreign Affairs and has 20 years of experience in transitional justice, including with the International Criminal Tribunal for the former Yugoslavia; the International Center for Transitional Justice, and the UN Support Mission in Libya.

Barney Afako, Esq. is a lawyer with experience in conflict mediation and is a part-time Tribunal Judge in the UK. Between 2006 and 2008, he was the Chief Legal Advisor to the South Sudanese mediation in the Juba Peace Talks between the Government of Uganda and the Lord’s Resistance Army.

Dr. Nadia Bernaz is an Associate Professor of Law and Governance at Wageningen University. Her research focuses on business and human rights by investigating the accountability of corporations and business people of their human rights impact through international, domestic and transnational processes.

Click on the link below to watch the English language broadcast of the International Transitional Justice Symposium: https://www.youtube.com/watch?v=C3J2I8F70Js