Your Excellency Prime Minister Ahmet Davutoglu: Indeed “It has now been eight years since Hrant Dink was taken from us,” suddenly and cruelly, from his family and friends. Your wishes for our patience seem insincere, since your government has been unable or unwilling to bring all those responsible for his murder to justice after all this time.

I am one of those Anatolians by heritage and also a Canadian citizen, who held Hrant Dink very dear. My roots, our roots, are still there in our ancestral land, Anatolia, as Hrant always talked and wrote. That is why it is so troubling to see the dichotomy you present between Hrant’s Armenian heritage and his loyalty to Turkey. His loyalty to that land, the homeland of his forefathers, and his love for all the people of Anatolia—Turks, Kurds, Alevis, Armenians, Assyrians, Greeks, Jews, and others—was an integral part of his identity. There was no need for him to compromise, as there was no separation of his Armenian heritage from his loyalty to the country and people. Yet, you make the prejudicial assumption that a compromise should have been expected between Hrant’s Armenian heritage and Turkish loyalty. You would never make or accept such an assumption about an ethnic Turk. Please remember, it was his land as much as it is yours. This is what Hrant was trying to explain. Alas, they, the real killers, did not understand his message. That is why they killed him.

It is jarring to see the anniversary of Hrant’s murder used as an opportunity to obfuscate the events of 1915. They were not as you state, simply “the inhumane consequences of the relocation policies essentially enforced under wartime circumstances, including that of 1915,” but rather, the killing, planned and executed by the state apparatus, of about 1.5 million Armenian citizens with the clear intent to exterminate the entire race and even the memory of the existence of the Armenians.

I also yearn for “friendship and peace” between our two peoples and wish very much “to open new path into hearts and minds.” But, how can we achieve that? How can you expect patience after 8 years, without bringing to justice those who were the real murderers of Dink, or those who took turns to get their photos taken in front of the Turkish flag with Ogün Samast?

How do you show empathy for Armenians when, on the day you commemorate Hrant’s death, 19 January 2015, the Turkish court lifts a travel ban imposed on Doğu Perinçek, so that he can attend a hearing at the European Court of Human Rights (ECtHR) related to his denial of the Armenian Genocide, scheduled to take place on Jan. 28? How can you talk about “Fostering a sense of mutual trust and cooperation,” when the Turkish Government actively defends Perinçek’s denial of the Armenian Genocide at the ECtHR, a man convicted in Turkey of being a member of Ergenekon, described by the Turkish court as an armed terrorist organization bent on overthrowing your own government?

This is a man who, following Hrant’s assassination, wrote a letter to the Armenian Patriarch Mutafyan in Istanbul and distributed in mosques, condemning the public sympathy for Armenians displayed at Hrant’s funeral as “a rally of war against Turkey.” 1 The Ergenekon evidence included a May 2007 letter from Perinçek addressed to Armenian schools in Turkey, urging them “to publicly declare in demonstrations, in their neighbourhoods, workplaces and social activities that allegations of genocide or other wrongdoings are lies,” warning that otherwise Armenians would soon be “counting the coffins to see how many real Turks there are in this country.” 2

In the Ergenekon judgment, the Istanbul court also found “similarities between the murder of … Hrant Dink and [other Christian minorities] which took place in different places of Turkey,” 3 supporting the prosecution’s allegation that these were “not separate individual incidents but killings done in accordance with a plan by the Ergenekon Terror Organisation with the aim of accomplishing a common goal.”

Given the Istanbul court’s finding concerning the Perinçek’s “leadership role” in “psychological war and propaganda,” within both the Talaat Pasha Committee and the Ergenekon Terror Organisation, and incitement to anti-Armenian hatred and violence, including Hrant Dink’s and other murders, it is astonishing that your government has intervened in support of Perinçek in this case.

It is my hope that human values, fortified with the knowledge of historical truth, will eventually empower Turkish civil society to demand more effectively that your government embrace the facts of history. It is worth recalling here the recent op-ed by Cengiz Aktar, titled “Entering 2015,” in which he wrote the following:

“…The Armenian genocide is the Great Catastrophe of Anatolia, and the mother of all taboos in this land. Its curse will continue to haunt us as long as we fail to talk about, recognize, understand and reckon with it. Its centennial anniversary actually offers us a historic opportunity to dispense with our habits, understand the Other and start with the collective therapy.”

When I read words such as these, full of wisdom and truth, it demonstrates the growing understanding of Turkish civil society of the fundamental issue, which your government continues to deny. Civil society’s movement in this regard is already evident in that the Human Rights Association of Turkey has made a strong argument for the racism inherent in the Armenian case. They wrote, “…we are the most immediate, direct witnesses of how the denial of the genocide against Armenians and other Christian ethnic groups of Asia Minor has right from the start generated an anti-democratic system, allowing racist hatred, hate crimes, and violation of freedom of expression and human rights in general…This has paved the way for Armenians in Turkey to be treated as a ‘fifth column’ throughout the Republican history, to be discriminated against, to be destined to lead their lives in constant fear as their lives were threatened during various nationalist upheavals and pogroms that took place during the Republican period.”

Moreover, two Turkish human rights organizations have partnered with the International Institute for Genocide and Human Rights Studies (A Division of the Zoryan Institute) to jointly submit a brief to the European Court of Human Rights in the Perinçek case – a matter of genocide denial – documenting his discriminatory and racist activities and statements against Armenians in Turkey and Switzerland. Such instances of co-operation do strengthen contacts between our two societies and take us on a genuine course “towards a horizon of friendship and peace.”

While your commitment “to press ahead with resolve to give due recognition to the Armenian cultural heritage in Turkey and those Armenian personalities who made inestimable contribution to Ottoman/Turkish culture” would be a valuable confidence-building gesture, it would lose its impact if your government continues its official policy of denial of the Armenian Genocide.

My wish is that you, as the prime minister of the country, would become an agent of change, bringing your government and the country on the side of the true history of 1915. With that truth acknowledged, it would be possible “to heal the wounds and re-establish friendship.” 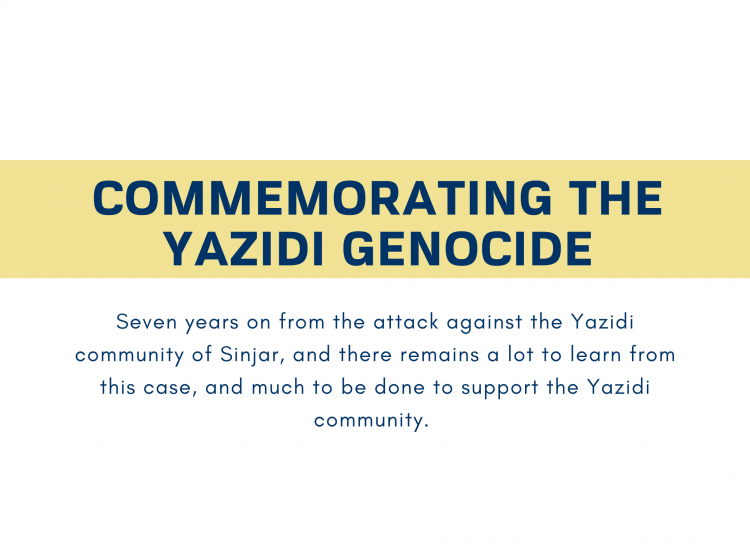