Toronto, June 18th, 2021: Celebrated each year on June 19th, Juneteenth is a day that commemorates the end of racial slavery across the United States. The day is tied to June 19th, 1865, when enslaved peoples were informed of their emancipation from slavery in Galveston, Texas. It may be noted that the official Day of Emancipation came two years earlier, in 1863, but it is General Grainger’s declaration of the Emancipation Proclamation in Texas that is commonly understood as the end of slavery. 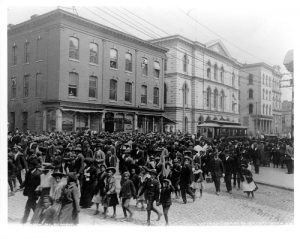 In light of the persistent inequalities and structural racism faced by Black communities in the United States, Juneteenth is not only important as it commemorates the end of slavery but serves as a reminder that freedom and liberation are an ongoing pursuit. What began as a local day of celebration has turned into a national day of commemoration and an opportunity for dialogue about America’s past, present, and future. Just this week, U.S. President Biden declared Juneteenth a federal holiday.

Days of celebration and commemoration can play an important role in community building and in forming collective memory, which is the way in which groups remember their shared past. However, collective memory also alludes to the presence of “collective forgetting” or “social amnesia,” which may be used as a tool to repress, ignore, or forget historical events. So how is this collective memory formed and furthered?

This Juneteenth, the Institute had the pleasure of speaking with Antoinette Winstead, M.F.A. to explore how symbolism and visual representation can help form collective memory, and how the celebration of Juneteenth nationally, must be carefully considered.

Q:  As someone who has worked extensively in the media and communications field, how important is visual representation and symbolism in telling stories and forming collective memory?

A:  Visual representation and symbolism in telling stories and forming collective memory is extremely important, especially in a digital age where mediated images govern many of the perceptions and beliefs held about individuals and groups. How individuals or groups are represented (or not represented) can determine how they are valued by society, which in turn determines whether they are even granted a place in the stories told and retold that become society’s collective memory.

Q: In your opinion, can popular symbols and visual representations (such as media, flags, slogans, etc.) play a role in enhancing communication and understanding between groups?

A:  If the popular symbols and visual representations are created by the stakeholders – those who are being presented through these means, then “yes’ they can play a vital role in enhancing communication and understanding between groups. However, what often occurs is that these symbols and representations become “commercialized” by the media, resulting in them being trivialized or stereotyped, or worse appropriated, losing the potency of the original meaning or message.

Q: Celebrations of Juneteenth have changed over the years, with public celebration common until the early 20th century when it became a more private affair, to once again become a public day of celebration after becoming an official holiday in Texas in 1979. More recently, Juneteenth celebrations have been featured in popular media on shows such as ABC’s Black-ish and FX’s Atlanta. How significant is this media representation for history and for collective memory?

A:  The media representation of Juneteenth in popular media, combined with the Black Lives Matter’s movement and the murder of George Floyd, which put the spotlight on racial injustice in the United States, has caused many to question why after over a century and a half is racial inequality still rampant. This questioning has drawn attention to the fact that because until recently the visual representations of Black Americans were being determined by white producers who relied on stereotypes, created over one-hundred years ago in films like Birth of a Nations (1915). These images, repeated over and over again, served to create a false narrative about the inferiority of slaves and their descendants that unfortunately has become the “agreed” upon history and collective memory of the nation. Shows like Black-ish, and Atlanta use their platform to reclaim the narrative which is significant if there’s any hope of correcting the fallacies dominating the nation’s collective memory.

Q: Juneteenth is a celebratory and commemorative day, but it also serves to remind all Americans of the ongoing struggle Black communities face in the “afterlife of slavery” (a term coined by scholar Saidiya Hartman). Do you think an increase in visual representations of Juneteenth celebrations through media, social media, film & tv can lead to national engagement with the holiday?

A:  An increase in visual representations of Juneteenth celebrations through media, social media, film, and TV can lead to national engagement with the holiday, as demonstrated by President Biden’s signing of a law that makes Juneteenth a federal holiday, effective immediately. The momentum to raise awareness about Juneteenth and the “afterlife of slavery” is evident. However, it will take a concerted effort to make the holiday meaningful for everyone, which I’m optimistic can happen if the nation is willing to question and recognize the discrepancies in its collective memory regarding Black communities and then be willing to have an honest conversation about why these discrepancies exist and how they can be remedied. Otherwise, the nation runs the risk of Juneteenth becoming just another excuse for a 50% off sale.

She teaches screenwriting, playwriting, directing, acting, and digital film production courses at the undergraduate and graduate levels. She is also an author, poet, and playwright.